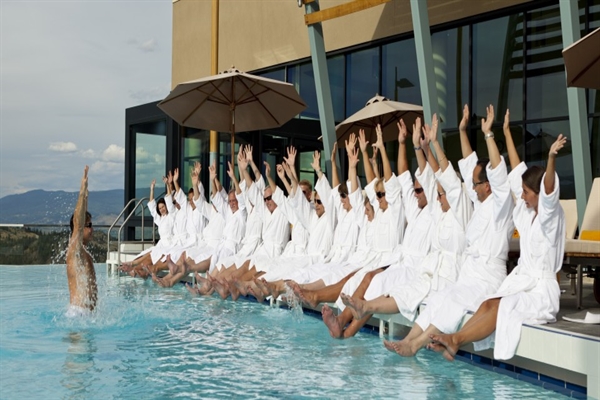 MINDFULNESS AND HABITS WITH DR. STRAUSS

Twenty sixteen is now one quarter of its way. We thought it a good idea for our Sparkling Hill readers to consider having Spring’s resolutions, instead of New Year’s.
0
SHARES
ShareTweet

This is because we all try from time to time to address some of those things we know we have been slipping back on. Examples of these are: not exercising enough, eating less than healthy food, getting up the same time of the day, or cutting a few drinks back on what we drink a week. The list goes on and on.

Unfortunately, few of us manage to make permanent progress with any of these resolutions, whether it is at the time of change-over of any year or at the advent of a new season.

This is not weakness or our fault. The reason is neurological.  Because our brain needs to not pay attention to every little thing we do, it has developed this amazing ability to memorize and repeat the things we regularly do.  Putting dishes in the sink, switching on the light as soon as we enter the room, washing our hands when we have visited the washroom—all are regular examples of action sequences learned progressively by the brain and most often performed by us without even thinking.  These unthinking action sequences are called habits and are wired into the brain circuitry. The brain has developed to be able to change, adapt and re-organize its circuitry in response to changes in its environment or situations. This process is called neuroplasticity.

Neuroplasticity causes lasting change to the brain throughout our lives. Previously neurologists believed that our brains developed during a critical period in early childhood, then remained relatively unchangeable (or “static”) afterward.  It can occur individually in our brain cells, or at much larger scale, such as when we relearn to speak after a brain injury in a car accident.  Our own and other people’s behaviour, our thoughts, our emotions and stimuli in the environment all may cause the brain to change.  (For more on this, please follow my blog series on this site on Brain Plasticity. The first instalment on that will be in the next newsletter).

The brain needs time to change its circuit from, say, not exercising, to getting the runners on our feet and walking out the front door without any or too much thought.  There is a myth out there that we can form a new habit after three to four weeks.  A small self-reported study from the University College London looked into this, after years of the science world accepting the postulate made in the 1960s by a cosmetic surgeon named Max Maltz. They found that on average a new habit takes 66 days to engrain itself –with the shortest time reported 18 days and the longest 254 days! Although this is an average number, what we can take from that is that it takes quite a long time to make a different circuit (or change a habit).

Here are a few tips to make ingraining that new habit into your brain more easily:

These reasons help motivate us on those days that the old habit wants to exert its dominance. Knowing what the bad habit is doing to us, helps us keep focus and make us aware of what is likely to happen if we stop pursuing the new habit. It is also important in changing the brain faster from the old brain circuits to the newer one.

The more we repeat the action of the new habit, the easier it is to do it next time.  This again is directly to do with neuroplasticity. One example: when I signed up with a personal trainer last summer, I could not warm up on the stationary bike at more than a resistance of 6. Now I pay hardly any attention at all that I am warming up at a 16 level of resistance.

Because “neurons that fire together, wire together”, we must be aware that the old habit had behaviours associated with it. These behaviours happened just before we did the bad habit, and slid us into the bad behaviour. For instance, my wife and I enjoy binge watching series on Netflix. Before we decided to change our eating habits, we used to also have a lot of snacks sitting before the screen. Today, when we decide to binge watch, we first eat our dinner at the dinner table and then go lounge and enjoy the show; if not, the temptation to snack is almost too much to overcome.

Remember that any habit can be broken, but that it takes time. Do not be discouraged by setbacks. The most important thing is not to give up, but to get up and try the new habit again. After all, remember we all did the very same thing when we were just little babies.  We tried, and then we fell and then got up again, and tried again. If we did not persevere, we would not be walking and running, but still crawling around on the floor!